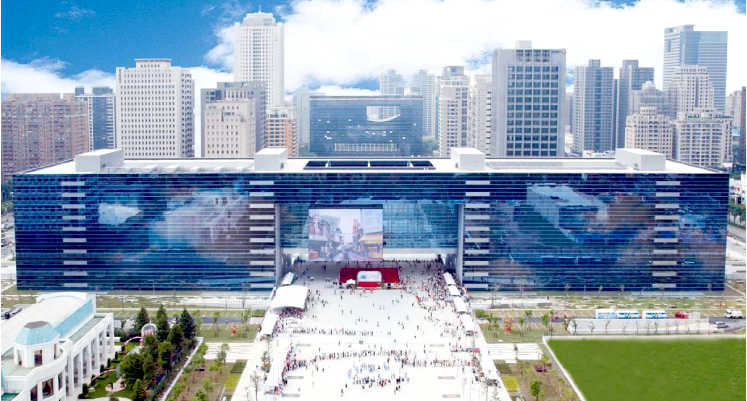 Under the strenuous efforts of Construction Division of Construction Bureau, a new political, economic, and art hub has been under construction in the block surrounded by Chungkang Road and Wenxin Road. The New Taichung municipal building, which was completed on October 10, 2010 and has started to offer services to the public since Dec. 25, 2010, is the first to be built among the three building masses (the new municipal building, the new City Council Building and the Metropolitan Opera House), symbolizing the first step to upgrade the urban construction of Taichung Special Municipality after the city-county merger and the birth to this political, economic, and art hub.

Booming in economic, political, cultural, educational, and recreational activities and active in international exchange in recent years, Taichung City has always been a core city in central Taiwan. It has been also enjoying rapid development in its urban construction, its re-zoning achievement, and transport network of high-speed rail, rapid mass transit, and highways. Taichung has been upgraded to a special municipality since the merger of former Taichung City and Taichung County on December 25, 2010. It is certainly the leader in central Taiwan.

In 1991, Taichung City Government started the preparatory work for international design competition for the new municipal center. In 1995, sent in from 44 countries were 130 works, which were rated by seven (7) internationally renowned masters. The design right was awarded to work No. 23, which was designed by Weber & Hofer AG Architects in Zurich, Switzerland. The winning design has set nine records in Taiwan, including Taiwan's first large-scale international public competition, Taiwan 's first municipal hall and City Council Building with large span design, the office building with the largest span (67.2 × 50 meters at 10 meters high) without falling pillar, the longest (252 meters wide) administrative office in Taiwan, the largest stone curtain ceiling, the first auditorium with suspension structure, the most transparent meeting chamber, the biggest LED screen, and the first municipal building to be awarded with National Construction Excellence Award in "Best Planning” category. 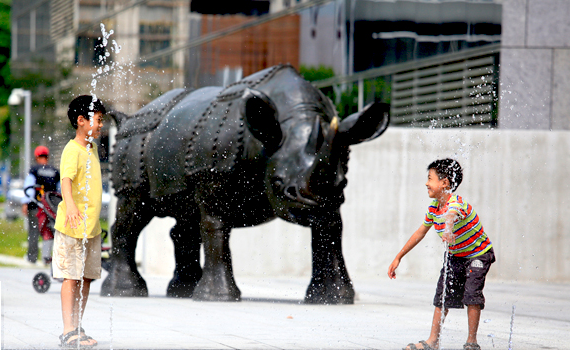 "Imagery of Democracy” is the concept that the new municipal center wants to present. “Administration” and “legislation” are the two main cores of democratic politics, which must be kept in check and balance and in seamless communication as well.

The 43.8-meter-high municipal building is designed in a lateral and long rectangular shape, symbolizing closeness to the people and service to the people. Meanwhile, the 69.8-meter-high new City Council Building is designed in an upright rectangular shape, symbolizing supervision over the administrative systems. The assembly hall inside the municipal building appears enclosed and suspended. It echoes the transparency and openness of the meeting chamber inside the new City Council Building. The arches and windows and doors are used as symbols to render the imagery of moving from "now” to "future” in a big stride. Meanwhile, the greenbelt at the central axis is used to link the two buildings, symbolizing the smooth interaction between the Government and the City Council. Landscape design is also used to adjust and balance the urban microclimate (meaning that the building design can change the climate within a small area).

At the axis of the new municipal center is the Chamber of new City Council Building, the assembly hall of the municipal building, and Green Park, respectively, which are combined into one by a central park designed in a cross-like shape. Through overall planning, the public space with continuous open space, plazas, and greenbelts appear very close to the people. Such a layout is unique in Taiwan in that it is completely different from the traditional and stiff bureaucratic design for municipal buildings.

The park in between the two buildings is so designed to appear warm and welcoming for getting together and strengthen the visual functions. If you come from the plaza facing Chungkang Road in the north to the municipal building and stand at the bottom of the suspended assembly hall, you can see through the new City Council Building, the surrounding parks, and the skyline formed by the buildings of a modern city. If you come from the south (Sicheng North 1st Road) to the atrium of new City Council Building and to the park in the center, you will find the open space under the meeting chamber is the entrance to the new City Council Building and it is also the connecting node to the adjacent parks. The 2 open spaces in the external strengthen the axis of the municipal center, making it appear solemn.

In equipment planning, a modern public building should be highly efficient, intelligent, environmentally friendly, energy-saving, and earthquake-resistant. It must also enhance the lateral and vertical integration. The facilities of new Taichung municipal center have all these elements and have already obtained five green-building candidate certificates for “green base”, “water conservation”, “water resources”, “daily energy saving”, “sewage and garbage improvement”. It will then apply for green building label. It is particularly worth mentioning that the new Taichung municipal building is equipped with the latest and special BRB earthquakeresistance system to provide good lateral stability for long-span structures at a very economical cost.

To make the two buildings fully integrated with the surroundings, the glass curtain facades are designed on the exterior wall to reflect the surrounding natural landscape. The reflection effect makes the overall construction both novel and harmony. The two seemingly symmetrical buildings cleverly show a slight asymmetry in a subtle way, making it even more interesting to observe. 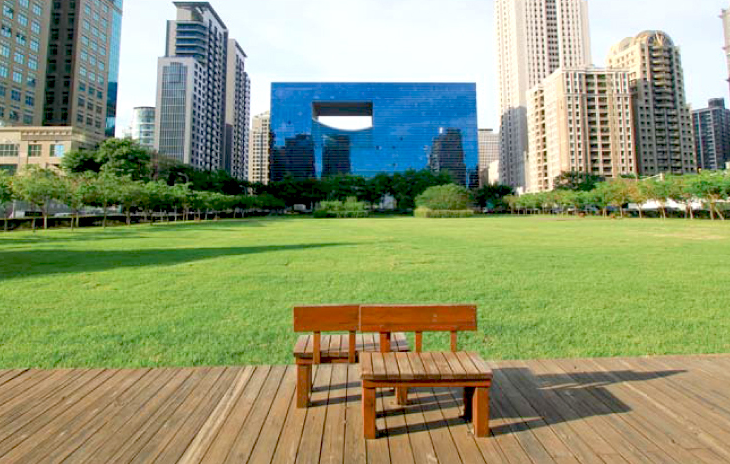 The facade of municipal building is constructed with arches and its assembly hall is designed with hanging frames to highlight the special nature of its structure. In addition, the structure consisting of vertical moving lines can resist the lateral force generated by earthquakes, strengthening the stability of the main structure. The ground floor of the assembly hall offers a place to enjoy outdoor landscapes and its central elevated platform extends visual penetration and continuity.

The new municipal center is simple but not easy

The construction of municipal building and City Council Building in the new municipal center lasted for 15 years and three mayors. It was caught in a standstill during the economic downturn. However, our teams at the Construction Bureau never gave up. They discussed actively with architects and related professionals on possible options. Weber & Hofer AG Architects was also very devoted during the entire process. As a result, the final outcome is in line with the original design. The new municipal building was awarded with National Construction Excellence Award in "Best Planning” category in 2010 and then National Construction Excellence Award in “Best Public Construction Quality” category in 2011. The 1-1 Park connecting the municipal building plaza was also awarded with Excellence Award for its creation of a good environmental and cultural and urban space in 2011, while the new City Council Building was honored with a Special Award for its “best planning and design for office buildings and factories” in the same year.

Ricky Liu is the architect responsible for the case. He wrote a special article mentioning that "The new Taichung municipal building is designed with a very high standard to stress the concept of ‘simplicity’ which never means ‘easiness’. Its beauty and simplicity is worth of careful appreciation. The case is marked with historic significance in the architectural evolution in Taiwan."